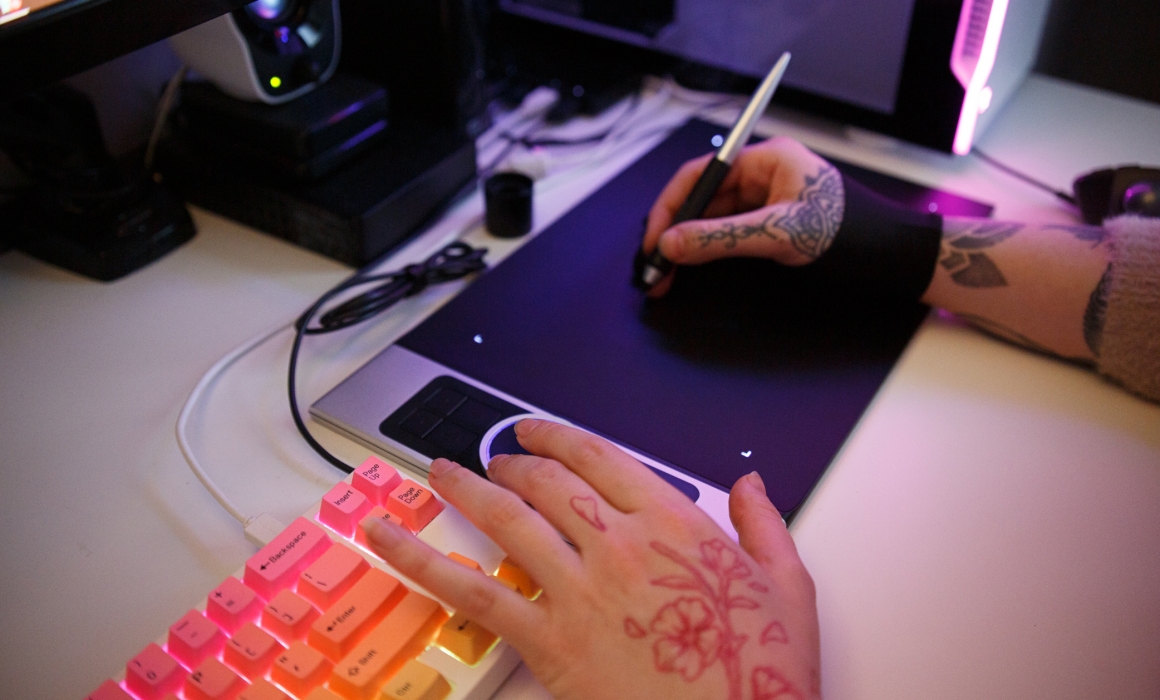 The most essential thing for me to have on my desk during my retouching process is a good drawing tablet, so in this first entry of ‘What’s on my desk’ I want to talk to you guys about the one I am currently using vs my previous one!

I can’t think of doing all these hours of retouching without a tablet. Ever since I started digital creative work (graphic design, digital art, retouching) I worked with Wacom tablets and my latest one was the Wacom Intuos Pro Medium. When I was contacted by someone from XP-Pen Netherlands to try out and review something from their new line of products I made the switch to my current tablet. My first non-Wacom tablet!

I always love trying new gear and this seemed very relevant to me, because though I’ve always done my work with a tablet, I never tried any other brands than the one I was used to. Apart from that, there’s a pretty significant difference in price so definitely felt worth looking into. I always advise people that follow my retouching classes to work with a tablet, and I’d love to be able to offer them a good lower price option. So it was time to test!

When deciding which tablet to test I chose a XP Pen Deco Pro medium to compare to my current Wacom Intuos Pro Medium because they are the most similar. This way I could easily switch without having to change up my workflow dramatically and I could make a pretty good comparison between the two.

They have similar buttons, a similar layout and a very similar working area. The XP-Pen tablet is larger on my desk but only has a slightly larger active area as the Wacom Intuos Pro Medium. Aesthetically, I like the look of both tablets. The Wacom one is all black, has smaller buttons and wheels and a more toned down look whereas the XP-Pen tablet has silver accents, larger buttons (works well for my big hands) and some accent lights on the screen to mark the active area and in the ‘wheel’. Both tablets have a similar weight and feel with a nice finish. Neither feel ‘cheap’. Both have a smooth surface, but the XP-Pen tablet feels a little more textured and paper-like when using the pen. A big difference is that the Wacom Intuos Pro has touch-functionality. I can’t speak on that much though, as I have actually never used it, I only worked with my pen and always had the ‘touch’ function turned off.

One thing I noticed when I started working with my Wacom Intuos Pro Medium is that the pen tip would wear down really quickly. I’ve had to replace it quite fast, after a few weeks. This was never an issue with my old Wacom tablets. At the moment, after using the XP-Pen for almost two months the pen nib is still going strong. Both pens have the same thickness and feel. The XP-Pen pen works well and feels nice to hold. I have multiple chronic pain issues as well as hypermobile joints in my already overly sensitive hands so this is an important detail to me. It’s not too thin and I can hold it in a way that makes my hand-therapist happy. I could do with a bit of a thicker pen, but it does the job fine as is. Both tablet pens have buttons that you can assign your own desired functionality to. The main difference is that the Wacom pen has an eraser nib on the back, the XP-pen one does not have that functionality. I don’t miss it though, as I always use my keyboard shortcuts to switch between tools in photoshop.

Speaking of shortcuts, you can assign any of those to any of the keys on the tablets. Both tablets have 8 buttons and 2 wheels in a different layout. The wheel on the XP-Pen works better for me because for some reason I noticed a lot of ‘accidentally touching both wheels at the same time’ on the Wacom. Quite a recipe for chaos sometimes. It might be the difference in size (XP-pen wheels are bigger) or the fact that the XP-Pen wheels are more distinctly separated from each other. I should say that while I call them wheels, the XP-Pen software calls the outer wheel the ‘dial’ and the inner wheel the ‘trackpad’. Because although I use it as a wheel (to zoom in and out), the center circle has trackpad functionality and can be used in a variety of ways. I set the outer dial to function as the ‘[‘ and ‘]’ keys so I can use it to quickly resize my brushes in Photoshop.

With any tablet, it takes some time to figure out all the keys you want to have and what works for you, and I find myself still switching the buttons from time to time, but it’s so easy to do with the tablet software that this isn’t an issue at all. I’ve assigned ‘open tablet setting’ to one of my buttons for a quick change if I feel the need. The XP-Pen software gives you lots of options to customize the way your tablet works, and while Wacom software does that too I feel like I get a more custom experience with the XP-Pen software, if only because I find it a bit easier to navigate. It’s easy, straightforward, quick and it feels ‘small’ and uncomplicated, which makes it a breeze to work with. Wacom and XP-Pen software both have some ‘issues’ with Windows Ink, and both require the same fix to work properly with pen pressure in Photoshop. That’s more an issue on Adobe’s end though, and once you know this fix it’s not a big deal, even if it’s a bit frustrating that we still have to deal with the software and OS not working together properly.

The part that is not so interesting to talk about but important to know: How similar are these tablets, technically? Where is XP-Pen saving money to offer a lower price? Is it still worth it? Let me put some of the main specs side by side.

As you can see, at first glance and after reading my review, there are a LOT of similarities. The XP-Pen is a bit more toned down and misses some fancy features like wireless connectivity but in return it offers a more affordable option with great functionality.

Both tablets are great, at its price point I am highly impressed with the XP-Pen Deco Pro Medium, and I haven’t had a single reason to switch back to my Wacom since I started using it. The only reason would probably be a few cm’s of extra desk space and one less cable 😉

Interested in purchasing this tablet, or a different XP-Pen product? Check out their website www.xp-pen.nl and use code 10%JoseFienH for a 10% discount! (valid until 31-1-2021)